﻿﻿﻿﻿﻿﻿﻿﻿﻿Amid geopolitical tensions and the long-term impacts of the pandemic, accelerating growth in a more sustainable and inclusive way has become an imperative for both Europe and Africa. As highlighted during the 6th European Union-African Union Summit, held in Brussels in February 2022, the time has come for the two continents to adopt a joint vision towards 2030, based on a fair and mutually beneficial economic, trade and political partnership: in order to meet the major challenges of the future, the only way forward is to strengthen the Euro-African dialogue, building high-level relations between key decision-makers in both realities.

The 9th edition of the Southern Africa Europe CEO Dialogue took place in Johannesburg on November 10-11, 2022. The event is a unique platform capable of promoting this dialogue and supporting the long-term growth of strategic trade and economic relations between Europe and Southern Africa.

Among the key topics of discussion:

During the event, we presented a Position Paper prepared in collaboration with ITA - Italian Trade Agency, entitled "Green Transition in Africa".

The Green Transition in Africa. An opportunity for international cooperation

Position Paper - The future of African cities, unlocking the potential of MSMEs 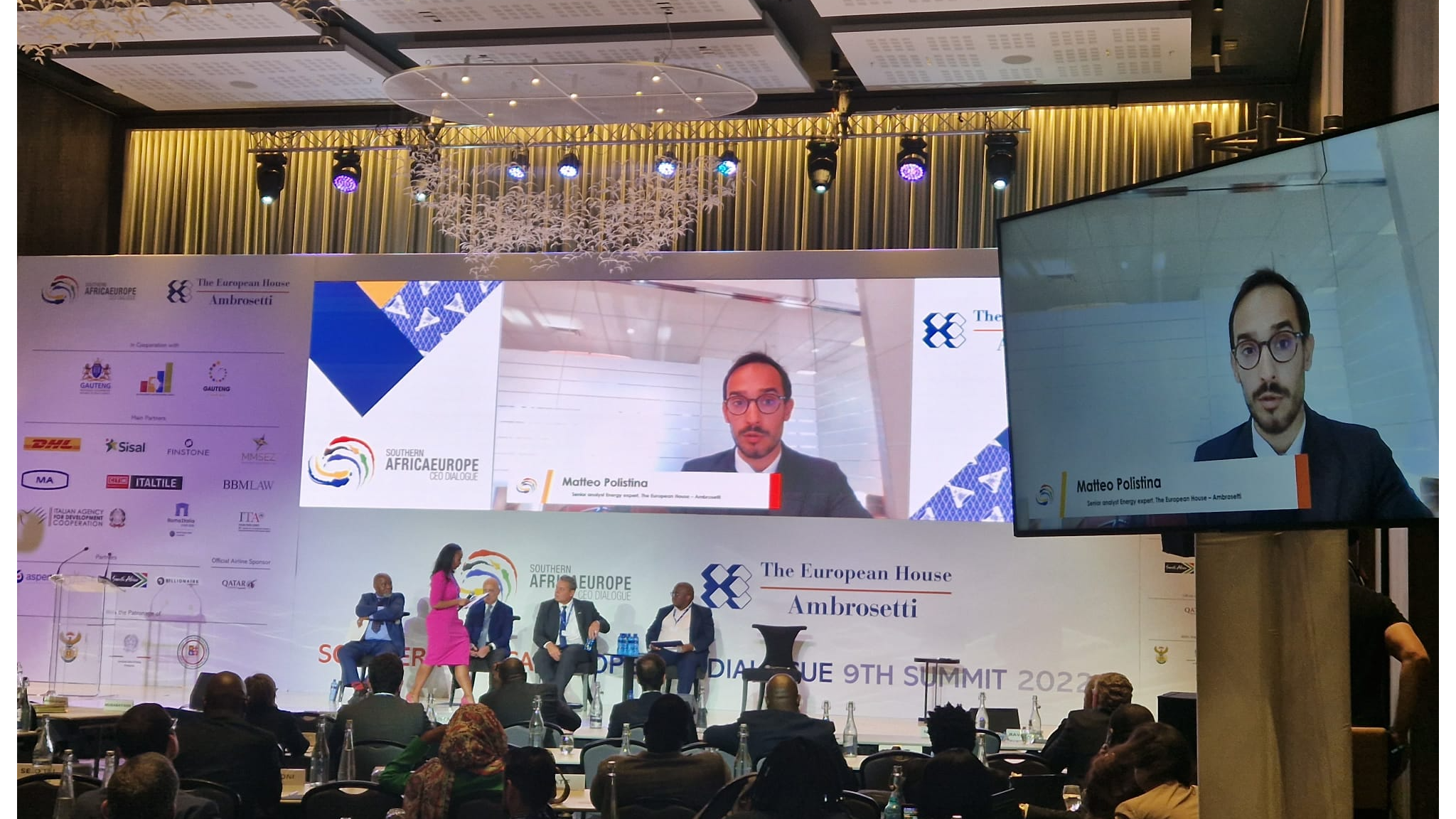 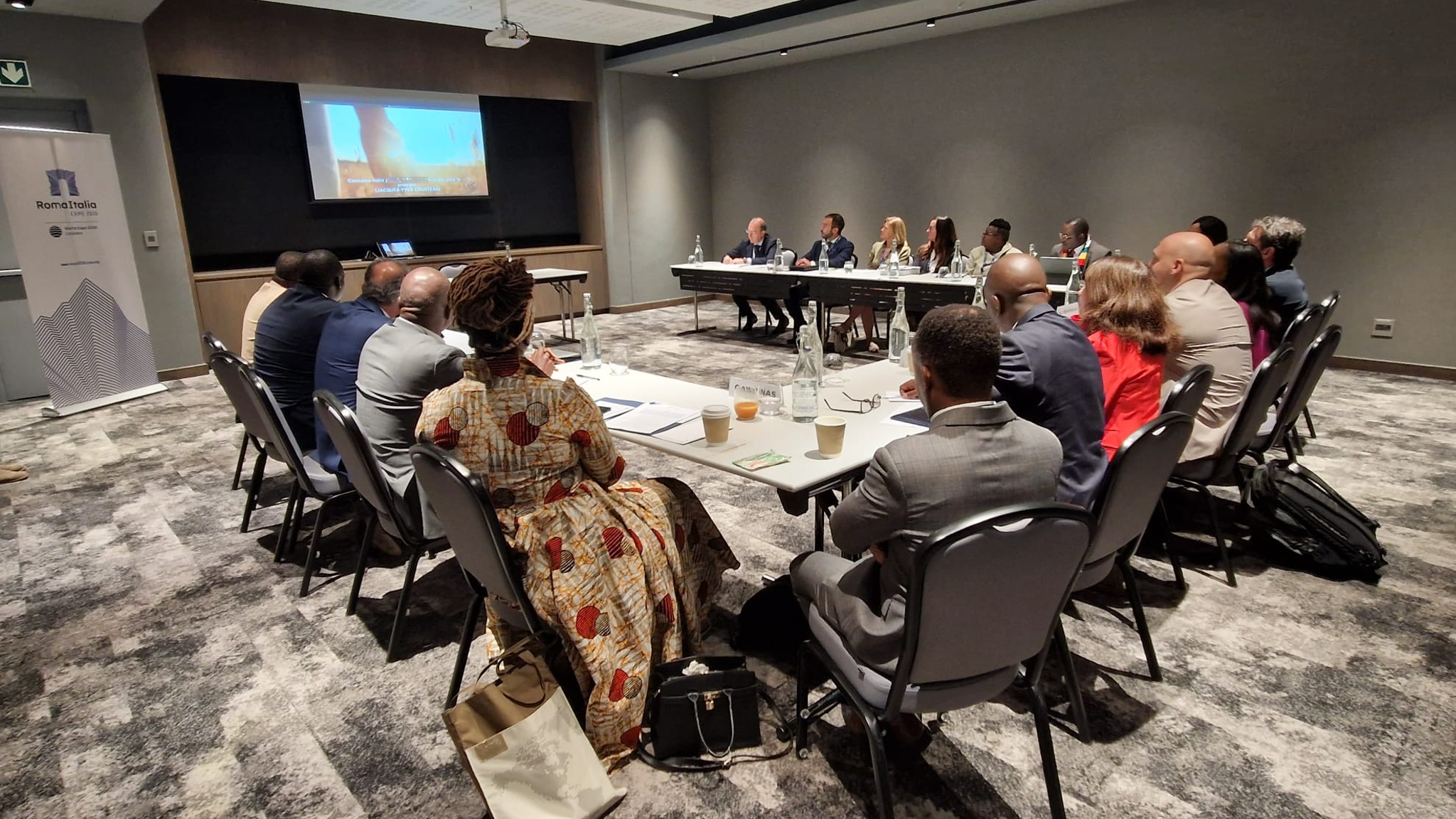 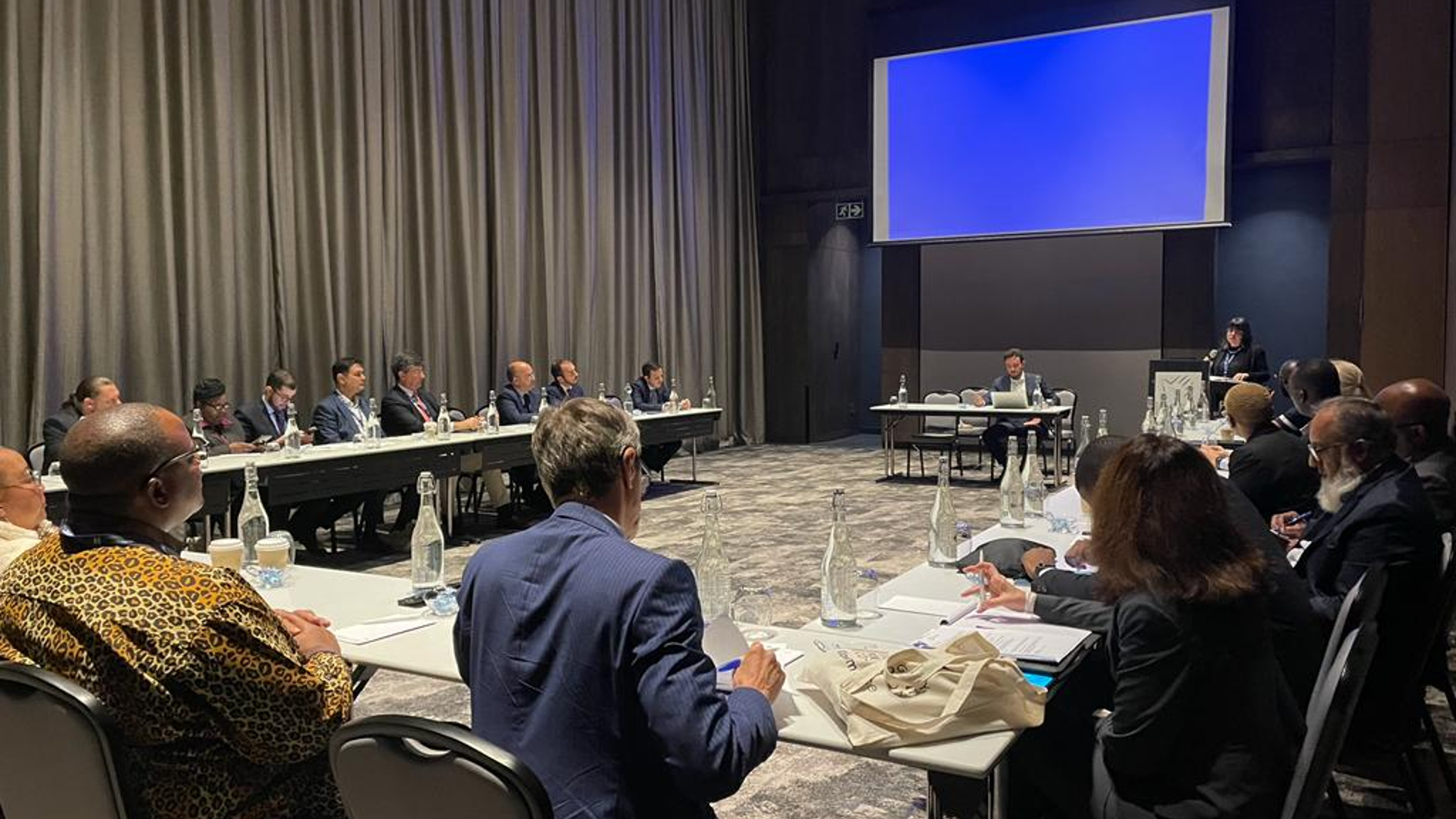 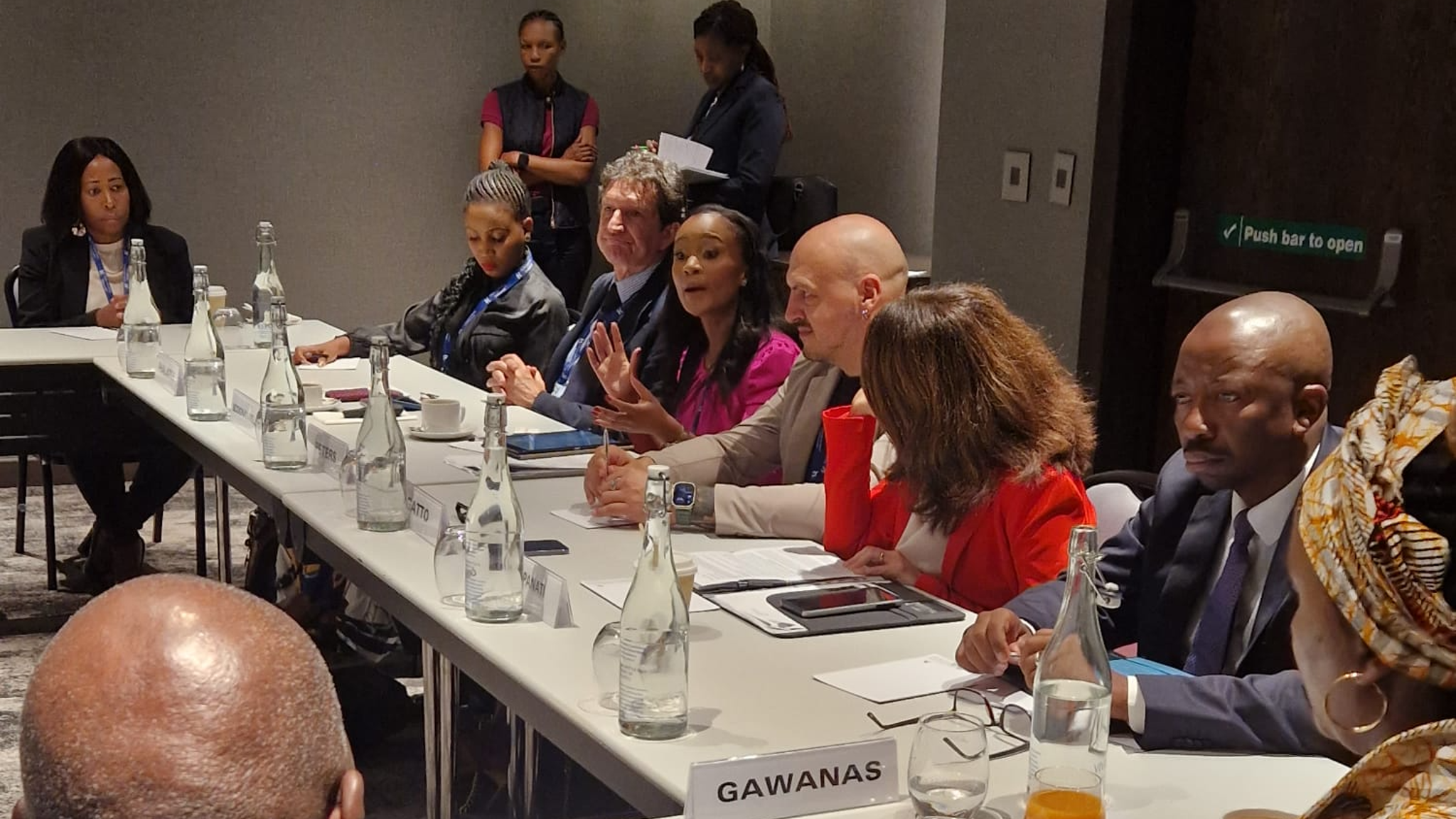 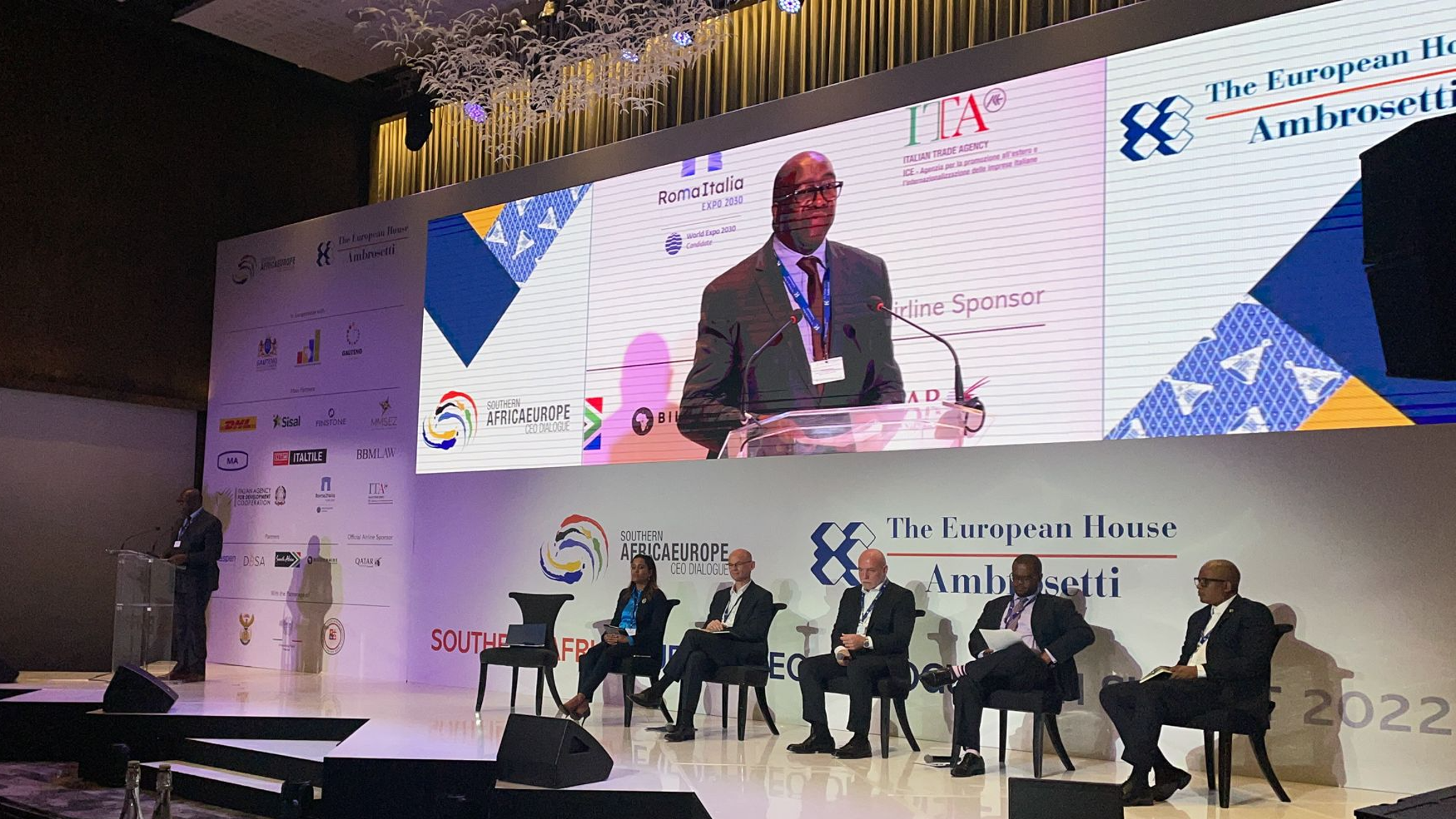 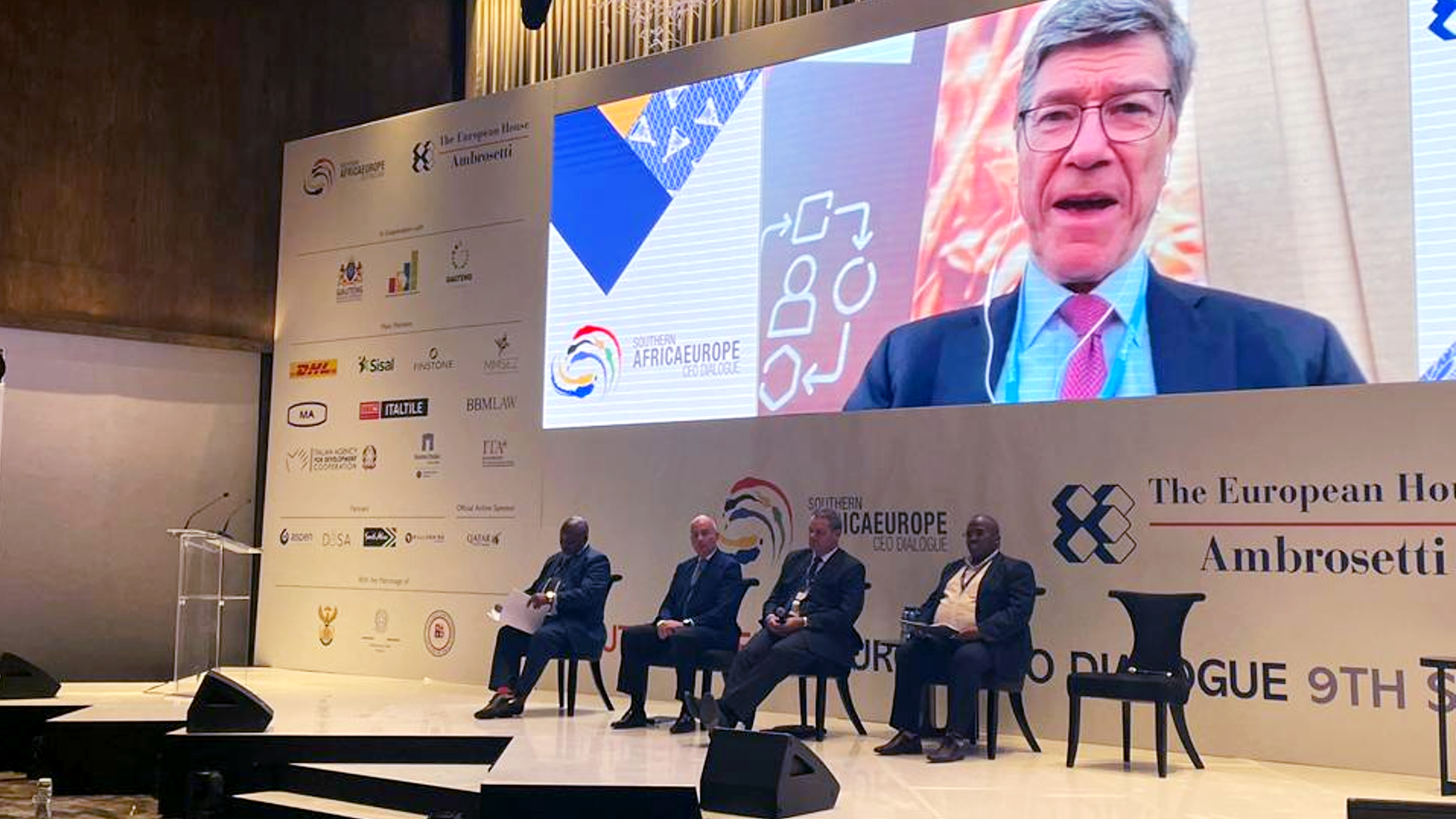 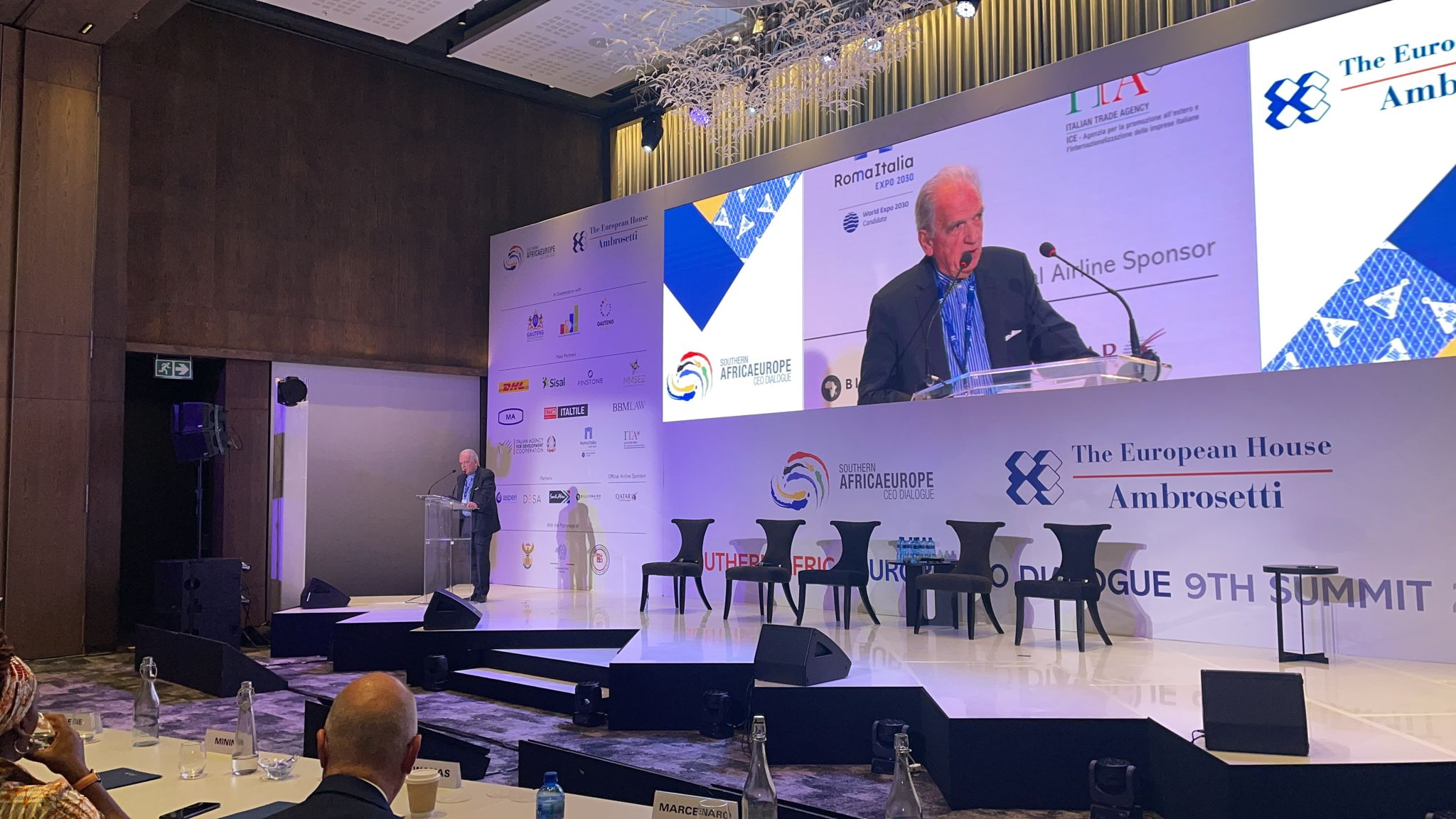 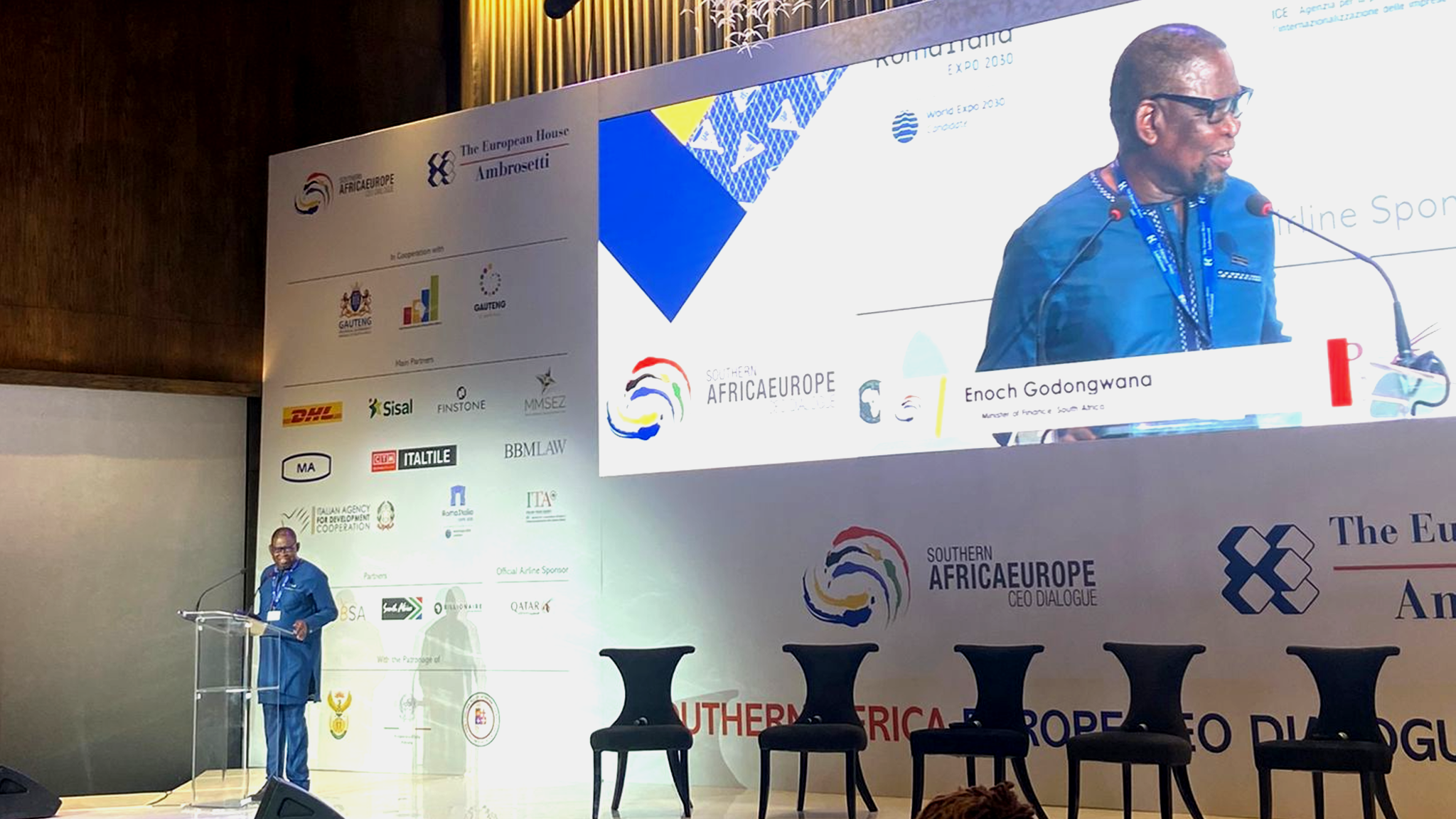 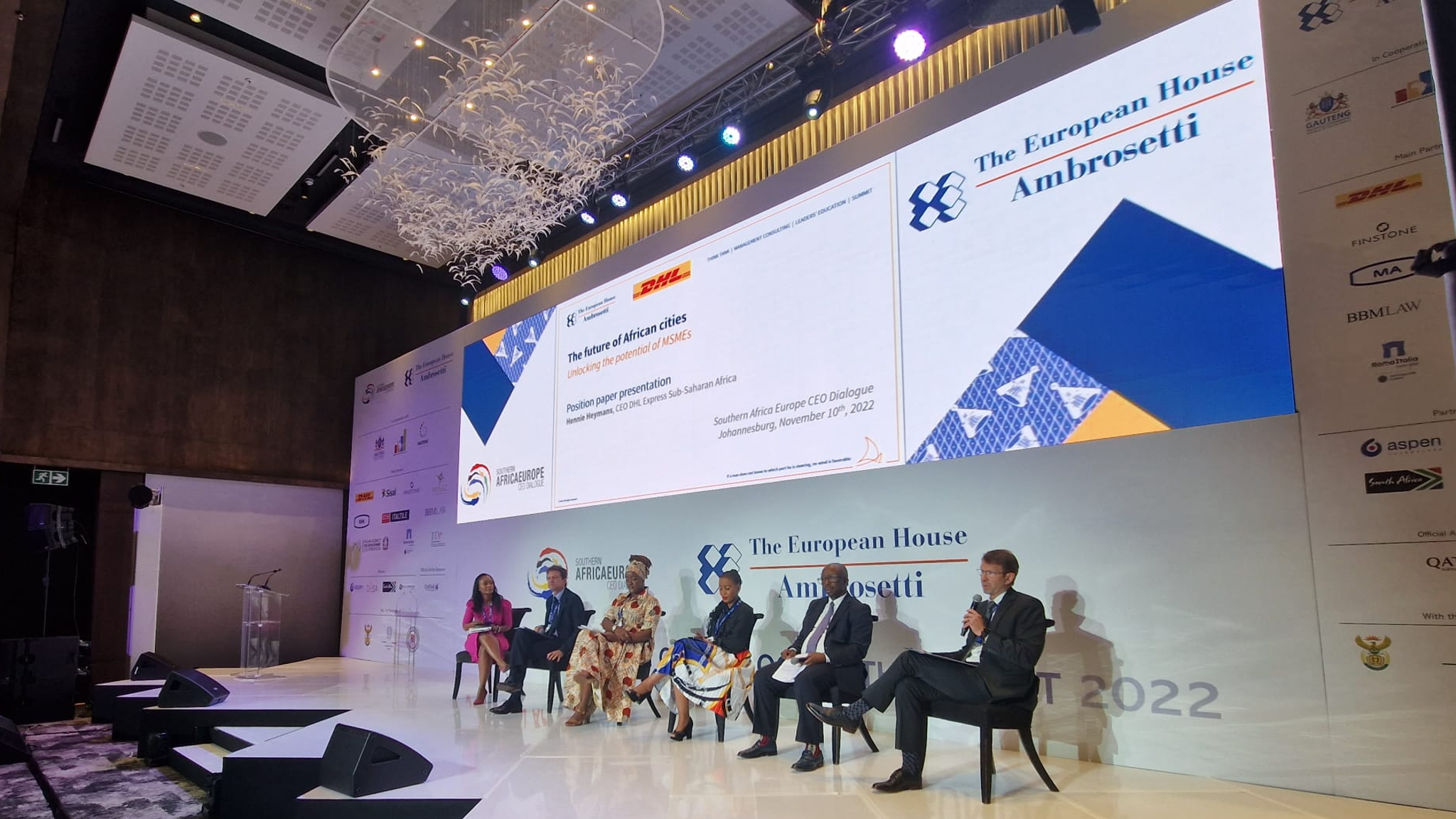 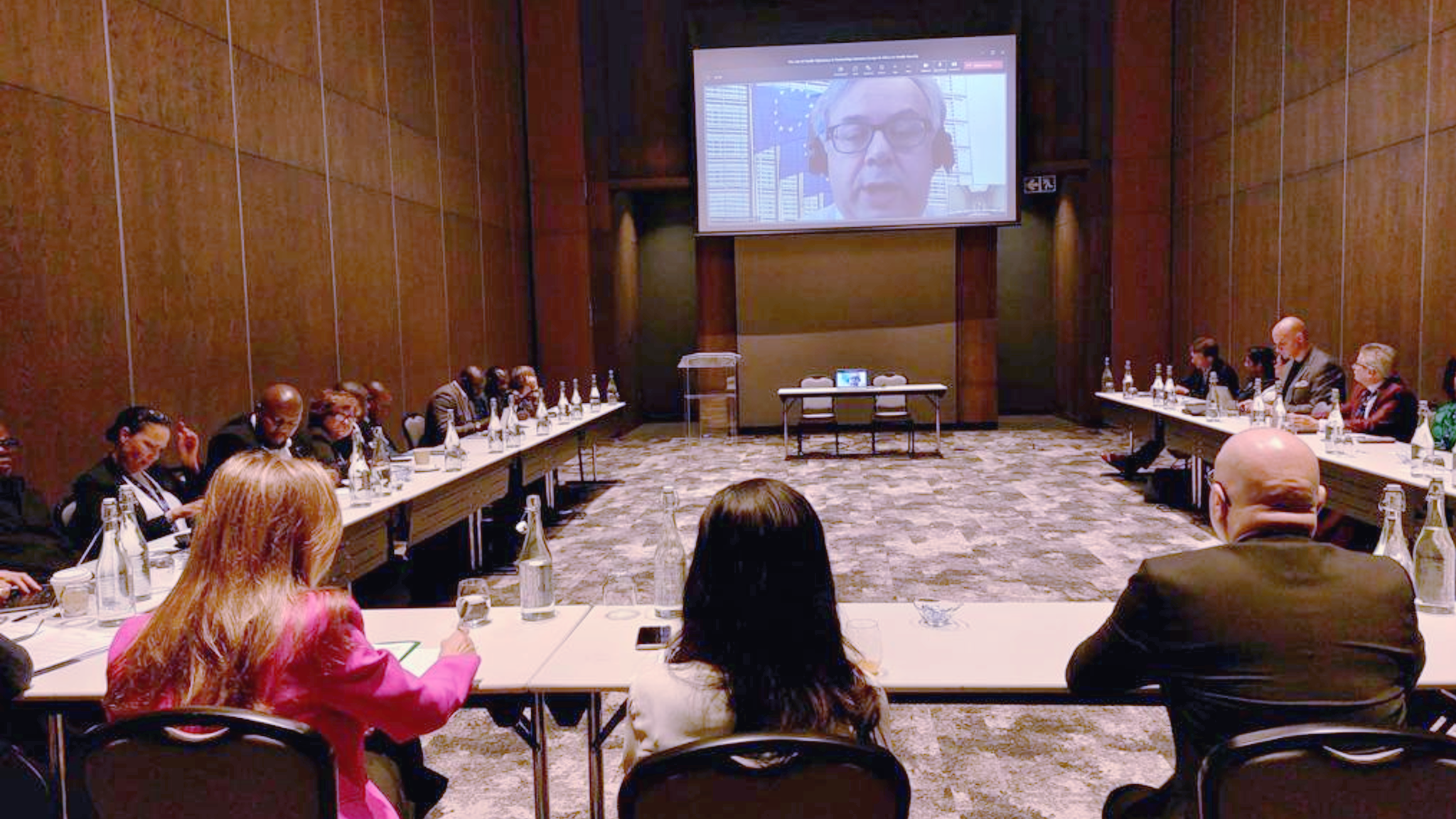 ﻿The Summit in brief

The initiative was established in 2014 by The European House - Ambrosetti, on the basis of the Italy-South Africa bilateral summit. Its purpose is bringing together top-level business and institutional leaders from both continents to share ideas, build new and strong partnerships, and learn about the enormous economic and political opportunities that exist within Euro-African relations today, with a special focus on SADC. The Summit aims to provide concrete approaches that have a direct impact for business, regarding the EU’s growing attention and commitment towards Sub-Saharan Africa.

In this context, Italy has a leading role in the development of cooperation not only with South Africa, but also with neighboring countries such as Angola, Botswana, Mozambique, Namibia, Zambia and Zimbabwe.

Thanks to a Think Tank of international experts and authoritative advisors, the Summit addresses issues of primary importance for Europe and Southern Africa, taking into account the geopolitical, economic, and social trends that will influence the future of the two continents. Areas of interest include manufacturing, automotive, transport and infrastructure, energy and renewables, education and research, tourism, health and pharmaceutical products, finance and agro-industry.

Uniqueness: the CEO Dialogue provides a unique regional and inter-continental perspective, involving business and government leaders from all over SADC

Networking opportunities: participants have the exclusive opportunity to get in touch with prominent European and African CEOs, Ministers and Institutions

Cooperation: the Summit is the only platform for European and Southern African players to create business opportunities, share ideas and start together a new growth path

Innovative and updated contents: the Summit’s plenary sessions focus on issues of primary importance for Southern Africa and Europe cooperation

Trust: dialogue, knowledge and personal feeling are the preconditions for a shared growth and are the basis of the exclusive community of leaders from all around the world that join the Summit

“The South Africa-Italy Summit has become the main event for the Italian and South African entrepreneurial leadership to strengthen bilateral economic relations. Building upon this bilateral framework, the Summit has evolved into a pan-European and pan-African platform to create strategic business partnerships at the highest level” (source: CNBC Africa)

Round Table in Copperbelt, Zambia, December 3, 2021

On the sidelines of the 8th edition of the Johannesburg Summit, The European House - Ambrosetti and the Italian Embassy in Lusaka promoted a digital round table on business opportunities in the mining sector in Zambia, where the Copperbelt Province is one of the main copper production areas in Africa and in the world.

Created on the side of the Southern Africa Europe CEO Dialogue in 2019, the CEO Community – African Chapter is a regional club of CEOs from European and African companies that brings together business leaders from Southern Africa to foster exclusive networking activities, facilitate contacts between companies and build privileged relationships with institutions in SADC countries.

The Community, which is reserved for a limited number of CEOs, meets in quarterly meetings where important international guests share their vision of the future of the world economy, and in particular on the African economy, with the participants.