Industry, Organization & Development | The European House - Ambrosetti
Think Tank Management Consulting Leaders' Education Summits & Events Our Communities News Media Lettera Club About us Work with us Where we are DoT - Do One Thing

﻿﻿﻿﻿The European House – Ambrosetti services are designed for:

Our model provides a modular approach. From a simple verification of the reasonableness and solidity of a project already created by a client, to developing a plan from scratch that ranges from finding equity or debt resources to help in implementing the plan, our clients can choose in which phases they would like our support, having a clear idea of the entire process. If the project is aimed at creating a strategic alliance or a M&A operation, our international network allows us to assist our clients in selecting the most appropriate partner. 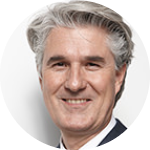 He is head of the “Industry, Organization and Economic Value” practice as well as point-of-reference for the “Global Fashion Unit” on both a national and international level.

He joined The European House - Ambrosetti in 2004 as head of management consulting primarily for Italian companies and, as such, has initiated and led major strategic as well as more operational projects in collaboration with both leading corporations and innumerable small and medium-sized companies.

With a degree in Nuclear Physics from the University of Milan, he was a researcher for four years, first at the Italian Institute for Nuclear Physics (INFN) and later for the SAES Getters group.

In order to extend his sphere of expertise into the management area, he received an Executive MBA from the SDA Bocconi-School of Management in Milan, following which he definitively chose the world of consulting in 1990, focusing initially on the application in Italy of the most modern and innovative Japanese production techniques based on the Toyota model (RDA-Gruppo Telos, 1990 and Jmac-Considi, 1991-1996).

Subsequently, in 1997, he created a “consulting boutique” (Assist Consulting 1997-2003), specializing in particular on small and medium-sized companies with special attention on the Textile, Fashion and Luxury sector and, more generally, on all “Made in Italy” and Italian “lifestyle” sectors.

Until 2004 he was also temporary professor of Technology Management and Competition at Bocconi University and continues to be a visiting professor in the faculties of Technology and Production and Master of Fashion, Experience and Design at the SDA Bocconi in Milan.

He is the author of numerous publications on industrial strategy, including the book, “Riprogettare il Sistema di Produzione”, published by Il Sole 24 Ore in 1984 (in collaboration with Minoru Tanaka).